On today’s episode of #OffTheHighway, I interview Brandon Rhodes of Springwater Community and The Parish Collective.  One of the topics we wander into is the concept of Church branding.  Brandon tells lovely stories about acts of goodness and beauty happening all around his neighborhood and how he and his community of faith are seeking to join in… not start something new, not draping their name or “brand” over their acts of participatory-service, simply joining in.

Listening to Brandon’s words, it reminded me of this story from my book Neighbors and Wisemen. 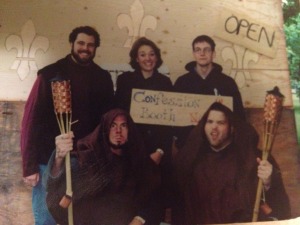 Before I ever got to campus, Ivan had a hobby. His hobby took place on Friday afternoons. The hobby was strangely simple. He took students to be with the homeless. To do that, he would check a van out from the Reed motor pool, and park it at Eliot Circle, at the center of campus, and wait for students to arrive. Ivan did no publicity. And yet, eight to twenty students would show up every Friday afternoon to ride to a southeast Portland homeless shelter called St. Francis.

I still remember the first time I met the van at Eliot Circle. I was there right on time, the same moment Ivan pulled the van around. At first it was just Ivan and me, leaning against the van under a canopy of Japanese Cherry trees. While I enjoyed a chance to stand and talk with my friend, for the most part I thought his little project was “cute,” nothing more.

Then the students started to arrive. Who are these people? I thought. I had never met these students before. There were none of our usual Oh for Christ’s Sake crowd.

Within fifteen minutes there were fifteen students crammed inside the institutional passenger van.

Off we went to St. Frances.

After two hours of visiting, serving, and dining with several hundred outside-dwellers, Ivan gathered the crew back into the van, and we rumbled back to campus. All along the way we talked. While he drove, Ivan chummed the conversation. “Why did you come along today?” “What did you learn from our neighbors who live outside?” (Ivan was careful not to use terms like “homeless,” which he believed could be a dehumanizing label.) 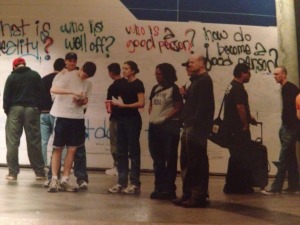 Soon back on campus, the students piled back into their dorms, and the van was returned to the motor pool. That’s when I jumped Ivan.

“Ivan, that was incredible! You provide this taxi ride to the homeless every Friday, and students just show up and come?” I was a pretty amped up.

“And you don’t do any publicity?” My curiosity could not be contained.

“Nope, it’s pretty much word of mouth, friends telling friends. I don’t even invite people much anymore. It has taken on a life of its own.”

I really wanted to encourage him. “Ivan, you need to know that this idea is really amazing. Not just the trip to St. Frances, but the conversation you led in the van on the way back. Brilliant! You are really illuminating the gospel of Jesus.”

Ivan looked sheepish and a little confused. “I guess.”

I didn’t even notice Ivan’s reticence. My desire to encourage had taken on a life of its own. “Ivan, I want to help you maximize the potential of this St. Frances thing. What if we called it the ‘Oh for Christ’s Sake Friday Homeless Outreach Project’ and maybe make some fliers? The great part of this is not only would more people get exposed to St. Frances, not to mention your brilliant debrief questions, but also . . . students might be motivated to come to other OFCS events. It’s called ‘cross marketing.’”

Ivan looked at me like I was speaking Persian. However, being the kindhearted gentleman that he was, he was trying hard to hide his offense. “Tony, I provide the van for St. Frances so students can experience St. Frances and so they can be with people that Jesus loves. I also do it for my fellow students, who I also love, so they can practice the things that we talk about in class. “

Man, I love this kid. He is wonderful, though a bit naive. He was not quite catching my idea, so I explained more, “Ivan, I don’t think you are listening to me. You and I are totally on the same wave link here. We want the same thing. I just think you could expand your influence with a little advertising and some name recognition.”

Ivan paused. Then he responded, trying to be respectful. “Tony, you are the one who is not listening. I don’t want to expand influence. I understand your heart, but Jesus is perfectly capable of expanding his own influence. The Christian church has divided again and again over a need to brand their work. That is why there are hundreds if not thousands of denominations today. The reality is, St. Frances is doing beautiful things. Reed College is also doing a beautiful thing to let us use their van free of charge. Why on earth wouldn’t we just support those two beautiful things without having to drape another name on top of it? Why turn it into a marketing strategy? At least, that is the way I see it.”

I can be slow. I think I finally got the point.

As I drove home that day, I steeped in Ivan’s words. “I don’t want to expand influence . . . Jesus is perfectly capable of expanding his own influence . . . The Christian church has divided over the need to brand . . .” Round and round his words went inside me.

Every neighborhood already has dedicated people and organizations in every realm of human need. What would happen if we stopped worrying about our religious brands? What would happen if we just supported those other dedicated souls with our time, talents, and money? What if we defended their efforts, not caring who gets the credit? How would that change the way others view the people of Jesus?

I think I know what Ivan would say.

I know what Jesus would say: “So when you give to the poor, do not sound a trumpet before you, as the hypocrites do in the synagogues and in the streets, so that they may be honored by men. Truly I say to you, they have their reward in full” (Matt. 6:2).

(excerpt is taken from Neighbors and Wise Men, chapter “Lessons”.)

2 Responses to “Does it Bother You that Religious Groups Need to “Brand” Their Service?”