A seasonally timely excerpt from my book, Neighbors and Wise Men.  From Chapter 13 “Hope”.

What is faith, anyway?

Early on, I was told that faith is trust in a series of beliefs: God exists, God is just, God is Creator, God speaks through the Bible, Jesus died on the cross, Jesus rose from the dead, and so on.

Later in life I was taught that that those beliefs were in fact not faith at all; they were just the setting, like the trees in a snowy for- est. Faith was not about beliefs; faith was about a person, believing in a person. Specifically, being confident in Jesus. That thought was helpful to me.

But I had another problem. Over the years my faith had been contaminated. There were powerful and subtle contaminants that had mixed in with my beliefs and been tenaciously reinforced. This reinforcement was unintentional and without malice, but it was toxic all the same. It came from dad, culture, church, and men- tors. These contaminants had names like independence, mercenary mentality, validation through accomplishments, comparison, and a very strong belief that I was generally not wanted around. These false beliefs made life with God impossible. So impossible that God did the only thing that a loving God could do. He took a baseball bat to my life. He shattered my spiritual kneecaps. He busted my spiritual collarbones. Once I was on the ground, with no fight left in me, he reached inside me, as if I were a Halloween pumpkin, and scooped me out. Then he declared a do-over. That’s the way it works with contaminants sometimes. He scooped out my “good” beliefs and my false beliefs. And he chose to start clean.

So I started from no-belief. Not atheism; atheism is anti-belief, which ironically is also a belief. Nope, this was just no-belief. 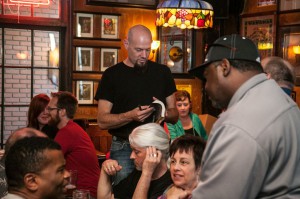 Over time, God and I started to talk again (remember the Turkish bathhouse?). It was nice to be back on speaking terms. Our first year back on speaking terms, God seemed to be interested in only one topic: fatherhood, specifically his fatherly love toward me. Sometimes I would try to expand the conversation, but he patiently steered me back to Father-love. He framed it as a quiet love, a still love. He would say, “Just sit with me. don’t do anything. Right now, I don’t care if you never do anything for me again. I just want to be with you and you with me. Come . . . rest your head. Rest your heart. Rest your soul.”

And so it went, one belief at a time, carefully and quietly planted inside my scooped-out soul.

I had still another problem. So much of my understanding of Christian duty had been framed by violence: There are two teams and only one can win. We must take the mountain, kill the giant, win the battle, defeat the enemy, fight for truth. This language had subtly convinced me that I was just a mercenary for God, nothing else.

I was tired of the violence. I had a hard time seeing Christian service any other way. I started thinking about getting out of the game altogether. I daydreamed about a very quiet faith, a very private faith. Maybe Jesus and I could retire. Get a place down in Florida. Maybe take up fishing. Jesus likes fishing.

One Response to “Scooped Out Like a Halloween Pumpkin”