The Magi knew better than to show up empty handed.

Advent has become one of my favorite times of year, but that was not always so.

When I was a child Advebnt meant little more than a chance to open little doors in a Hallmark calendar to find wax-flavored chocolates behind. That was then.

Today, it is a season of intentional family spiritual conversation.

It is also a deeply theologically meditative experience as our community ponders the implications of a God who would ask us to join the eternal story by choosing to become a helpless creature in our story.

The Nativity story itself provides layered narratives of justice, provision, oppression and the inverted economy of God’s kingdom.

It is of great significance that both poor (shepherds) and rich (Magi) were invited into the story of Jesus’ birth. It is important that God orchestrated it that way and that God’s people chose to record and remember…

Rich and poor. Poor and rich.

All Are Invited In

It is nose-on-your-face obvious that God has a special place for the poor in the eternal story. Jesus claimed that helping the hurting and marginalized was the same as helping Jesus himself (Matthew 25:31-40). In Luke’s Gospel it states frankly, “Blessed are the poor, for yours is the Kingdom of God” 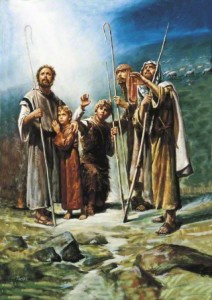 (Luke 6:20). If these passages are not convincing enough for you, consider Mary’s prayer (The Magnificat) upon hearing that she would mother the Messiah (Luke 1:51-53):

He has performed mighty deeds with his arm; he has scattered those who are proud in their inmost thoughts.

He has brought down rulers from their thrones but has lifted up the humble.

He has filled the hungry with good things but has sent the rich away empty.

It is no wonder that the shepherds were given a star-spangled invitation to the manger. And yet, the Nativity is not populated with the poor alone. Wealthy Wise Men from the East also find their way to the babe’s bedside.

A Reflection on Privilege Dynamics from the Nativity Story

Privilege manifests itself in different ways throughout the Nativity story. For instance, the shepherds were stuck with a mind-bending encounter. Their introduction to Jesus is instantaneous, overwhelming and immediate. It is quite possible that the entire shepherd narrative takes place in just a few short hours: angels, announcement, invitation, walk into town… and then back to the hillside where their work cannot wait (sheep don’t take a night off.)

Not so for the Magi. There is no conceivable way that their story took only a few hours. Quite on the contrary, it is hard to imagine it lasting shorter than a few months. Try to imagine it: they had to prepare for their significant trip; they had to travel from a place so far it is only known as “the east” and after 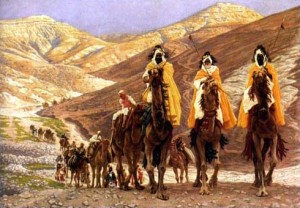 finding Jesus, they had to journey back “by another route” (Matthew 2:12). Didn’t they have jobs to attend to? Didn’t they have bills to pay? Who can partake a fanciful, multi-month quest? Apparently the Wise Men can. Their privilege allows them to do so.

The Magi story required a freedom of schedule that perhaps the shepherds simply could not afford. This is one way privilege takes action.

How did the shepherds come to the knowledge of the Messiah born? While childhood Torah studies may have softened the soil of their souls, the bulk of the knowledge was as subtle as a freight train. It was a marching band in the sky… a nuclear blast of blessing… a miracle. This is how God chose to speak to them, blunt and immediate…. not so with the Magi.

In the Wise Men story, we are told of no explosion in the sky, no angelic chorus. Instead, they were required to utilize a very different treasure of opportunity. They must have had access to a whole library of sacred documents to study in order to unravel the arrival of a distant king. They had to have had a knowledge of astronomy and calendars that enabled them to calculate a coming that seemingly alluded everyone else, including Jewish scholars. Sure there was a twinkle in the sky to guide them, but that was not enough. Thank goodness that they had the sort of access to power that allowed them to stroll up to King Herod’s palace and ask for directions. Lingering studies, libraries of knowledge and access to power… these are the often unspoken benefits of privilege. 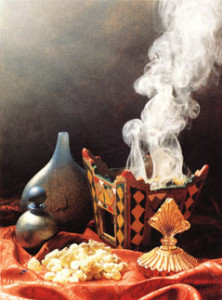 I am not going to cheapen this point with heavy-handed words.

Let me state this as plainly as possible…

Both poor and rich were welcome inside the Nativity story…

But the rich had the good sense not to show up empty-handed.

It is good to show up with a smile and a blessing the way the shepherds did, but the Magi knew that they had the capacity to give more… and so, they knew not to show up empty handed. How about you?