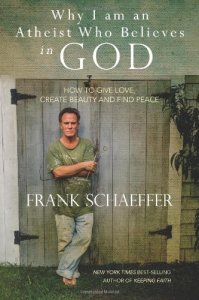 In yesterday’s episode of #OffTheHighway, Frank Schaeffer takes the time to explain how he can be “an atheist who believes in God.”  If you haven’t had a chance to listen, click over to the Off The Highway page to hear this thought-provoking 4 minute video.

In my complex sphere of friends (and yes I am honored to call Frank my friend) there are few others that elicit such strong negative reactions.  True, this son of twentieth century Christian royalty, this architect of the Moral Majority, this favorite apostate from evangelicalism gives the world plenty of material to feast on.

He is ever opinionated.  (Keep your eyes open.  In the not too distant future we will have an #OffTheHighway episode where Frank answers, “Why do you hate Evangelicals?”  I am not kidding.  Look for it.)

Controversial? Yes. But is that grounds to completely dismiss him?

Why do we do this?  Why do I do this?  Too often we live in a binary world, like some cosmic Santa, where people are relegated, part and parcel, to either the “good list” or our “bad list.”

I remember when the Jerry Sandusky scandal happened and suddenly forever beloved, could “do no wrong” Penn State football coach, Joe Paterno, was moved overnight from the “good list” to the irrevocable “bad list.”  Granted that scandal was nasty and deserved a strong response, but why do we feel compelled to declare people either “insidiously dark” or “gloriously light”?

Aren’t we all a mixture of both?  And if we see one another as both, maybe we will be less likely to play the game of Survivor where we are voting guys like Frank Schaeffer off of our self-governed island of internal validation.

In a world of Rush Limbaugh and Bill Maher, Frank is making sure that his voice is heard.  To do so, he needs to have a strong opinion, but don’t believe that he is not a man of nuance… as his current book’s title illustrates ever so clearly.

And, if you are curious, in my travels, I have encountered few people who are as personally encouraging to me and my work than Frank Schaeffer.  He is always available to me to listen and give sound (and sometimes cutting) advice.  He is ever concerned for my family.  He picks up the phone when I call.

Caustic and compassionate… he is both.  And if I am honest, so am I.  At the end of the day I don’t want to be dismissed either.

One Response to “Why Do People Hate On Frank Schaeffer?”