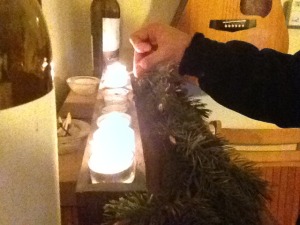 I am in the process of following an Ignatian Prayer guide.  It has been helpful on my journey.  Today I was encouraged to think back to those people that have revealed God’s loving presence to me.  I went, as I often do, to my candles, lighting one at a time as I let my mind drift through my forty-four years under the sun.

Here are three of those names:

Jerry Groat:  Jerry loved me when I was too snotty and stupid to be loved.  He took me to Eugene Emerald baseball games.  He taught me the Bible.  Even as a small boy, I was aware of the fact that Jerry was something of a misfit.  He wore the same course green suit every Sunday to church, his hair always seemed wet and he didn’t smell like anyone else that I knew.  Those were just qualities about him.  They didn’t define him… at least not in my young eyes.  Jerry was kind to me.

Jerry, the missionary.  Jerry #2 was the leader of the Italy team in the summer of 1987 (I was going to Ecuador.)  We road on a bus together from Portland, Oregon to Florida.  It was a school bus.  It was Jerry, a middle aged man with a receding hairline, and dozens of teen-agers for six days and nights of near non-stop travel.  Jerry made an example of me on more than one occasion (even though I was convinced that he liked me), punishing me for things that it seemed everyone was doing. I was still small in ’87 and uncomfortable in my meat-suit.  On the second to last day, I mustered my confidence and confronted Jerry on his mistreatment of me. I will never forget his response. He asked me right back, “Why do you think I treat you differently?”  He made me grope for the answer for minutes, throwing out every religious phrase I could think of.  Finally, Jerry blurted the answer, “It is because you are a leader.”

Leo… Known as Richard (Leo was just more fun to put in the title of this post), I knew as an adult, until he unexpectedly died two years ago.  I never understood why he gave so much time and priority to a clumsy caucasian kid like me.  I would love to tell you about him, but since I ran into this last night, I thought I would just introduce you to his words: